The winners of the contest for short films “The Ideal City” have been announced: the international open call has received 49 submissions from 17 Countries, all focused on the topic of the contemporary ideal city viewed through the lens of the audiovisual medium.
The Jury, chaired by Mario Sesti and composed of Giorgia Boldrini, Laura Delli Colli, Vittorio Salmoni, Fiamma Satta, Valentina Tomada, Ginella Vocca, has awarded two short films and given two special mentions: 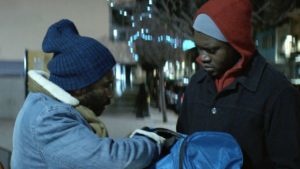 First Place – awarded with a cash prize of € 1.000 handed by Fabriano UNESCO Creative City for Crafts and Folk Art

ALL MY GUARDIAN ANGELS by BERNABE’ RICO – SPAIN
The opening long sequence shot, a technical and visual tour de force, immediately creates a symbolic and dramatic space of undeniable strength.
The expertly controlled suspense; the depiction of a multifaceted, nocturnal suburbia; a landscape of multiethnic and intercultural integration; all these elements contribute to create a credible picture of the dark side of our society, as well as a sharp allegory for the fragility of life – everywhere to be seen just around the corner of our comfortable lives.

Second Place
LA GITA (THE CLASS TRIP) by SALVATORE ALLOCCA – ITALY
By effectively portraying people and glimpses from a suburban Naples and by unconventionally using the coming-of-age love story genre, this short film’s narrative oscillates between two universal, timeless themes and questions: the teenage discovery of love and the difficulties of facing the issues of identity and diversity.

The answer to both questions conveyed by the director cannot leave the viewer indifferent.

The Jury has also decided to give two special mentions:

With an original use of the documentary language this short film skillfully shows what happens when a working-class condominium becomes the accidental set of a movie, portraying different social groups, families, societies and their constant interaction as the core element of the living fabric of a City.

For the surprising display of original images, caught by an eye nestled in unconventional, revealing perspectives: such perspectives give the viewer the chance to get the image of the City – through the fantastic apologue of the story – as a whole, vast and fascinating like a planet yet to discover.